What You Need to Know About U.3

With Big Data getting bigger all the time, there’s undoubtedly a growing need for higher performance data storage solutions. Storage host controllers, specifically, need to be way more reliable under such intensive workloads.

U.3 is a ‘Tri-mode’ standard, building on the U.2 spec and using the same SFF-8639 connector. It combines SAS, SATA and NVMe support into a single controller. Where firmware support is available, U.3 can also support hot-swap between the different drives.

Here’s a hardware engineer’s perspective on how this controller is new, challenging and full of potential.

Key changes from U.2

Bringing it all together…

With U.2, you’d need a separate connector pinout/backplane, a separate mid-plane and controller for each protocol. U.3 only requires 1 backplane, 1 mid-plane and 1 controller, supporting all these drives in the same slot. This could be a great advantage, with SAS and NVMe forecasted to increase over the coming years—and SATA to decrease (according to OpenCompute).

This brings us to the main difference between U.3 NVMe drives compared to U.2 NVMe drives: the pin-out for the data lanes are different, with all protocols using a common set of data pins. Then there’s the Host Port Type pins (HPT0 and HPT1). These pins are mainly used by the U.3 Gen-Z and U.3 NVMe drives. Different combinations of these pins tell the drive which host is it inserted into.

U.3 drives are still backward compatible with U.2, though—the U.3 drives determine which host type it is inserted into (by using different combinations of HPT0 and HTP1 being open or ground), and configure the data lanes on power-up. U.3 drives can still act as dual-port NVMe drives in supporting systems.

U.2 drives are not compatible with U.3 hosts. 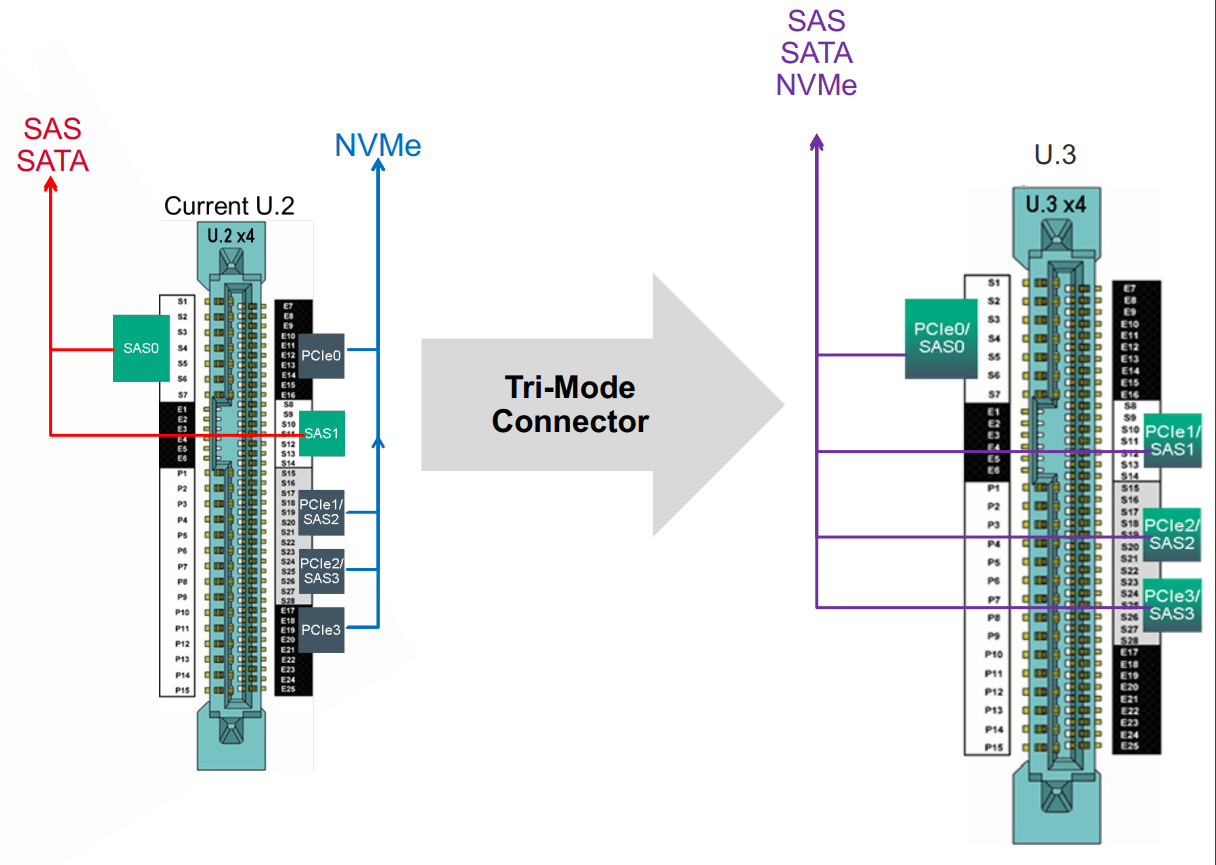 Challenges still remain—how do we overcome them?

While working with one of the companies leading the way in developing the U.3 host, we encountered a hurdle: compatible NVMe drives for U.3 are difficult to get hold of, with U.3 being so new to the scene. U.2 NVMe drives, unfortunately, don’t work in U.3 because the data lane pin-out doesn’t match. However, SFF-TA-1001 seems to be the key—it sets out what is needed for U.3 drives to work in U.3 while keeping the backward compatibility, meaning U.3 drives work in both U.2 and U.3.

At Quarch we’re always adapting, and this is no exception! We worked to develop a small adapter which fits between the U.3 host and a U.2 NVMe drive, allowing the U.2 drive to work in the U.3 host without a problem. This allows hosts to have initial testing performed with existing U.2 drives.

We didn’t stop there. We then added a flexible cable that allows the user to tap into—or break—the SM Bus for testing purposes.

It’ll be crucial to have reliable testing solutions for U.3 hosts and their compatible devices. Excitingly, I’m closely involved in developing this. We’re now making a U.3 breaker module, which provides full hot-swap automation by allowing all data lines, sideband and power connections to be connected or disconnected either individually or in groups. It’s also one of the first modules to support external triggering, and will soon be upgraded to include sideband monitoring!

For me, though, a challenge still remains: while reading the standard, the reader is told to refer to either the PCIe or SAS standards depending on which drive type you’re interested in. The issue here is that the data lanes in PCIe have an impedance of 85 Ohms, while SAS is 100 Ohms. So, when making a U.3 host, which impedance is used?

It’ll be interesting to see, in the future, whether manufacturers counter this problem by changing the impedance of these devices to bring them in line with one another.