How to install QIS

There are two ways to install QIS, Directly from the Quarch Website or via our python package QuarchPY. The latter is recommended as it comes packaged with QPS and our python API for easier automation.

Go to the quarch website and either search for QIS or go to the download page via Support/Downloads/Applications/QIS – Quarch Instrument Server.

Unzip the folder in the desired location and run qis.jar by double clicking it or navigating to the directory and using the command “java -jar qis.jar”

TIP: You can pass the argument “-terminal” to launch QIS with the terminal window open. “java -jar qps.jar -terminal”

The second way is to install the quarch python package QuarchPy using the command “pip install quarchpy” in a terminal window. This will install the complete python package into your python directory on your machine. Please make sure you install python in a location you have permissions. QuarchPy comes with QIS and QPS already packaged within. Qis can be found at the following location:

It can then be launched using the same methods as above, launched within python script (See application note 12), or from the command line using QuarchPy’s run function : “python -m quarchpy.run qis”

The default ports to talk to QIS are Telnet Port: 9722 and Rest Port: 9780. If you have launched QIS on an OS that does not have the system tray you can send the shutdown command via the preferred port. If you have used a custom port number you will need to take note of this and send the command over the correct port number. 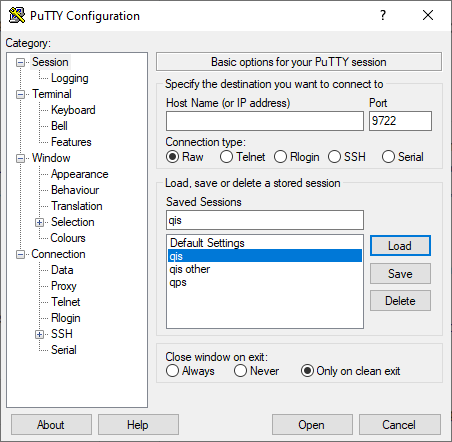 You can set up a network connection to QIS using the port number and IP address. QIS can be run locally but it can be used over a network so doesn’t even have to be running on the same machine.

How to close QIS

QIS can be closed simply by sending it the command “$shutdown” or by right clicking on the icon in the system tray and selecting Exit.

If you are having issues with either of these ways then QIS can be force closed in other ways which are listed below:

If you are using windows QIS can be identified using the “command line” column in the task manager. It will show “javaw -jar qis.jar”, or similar. 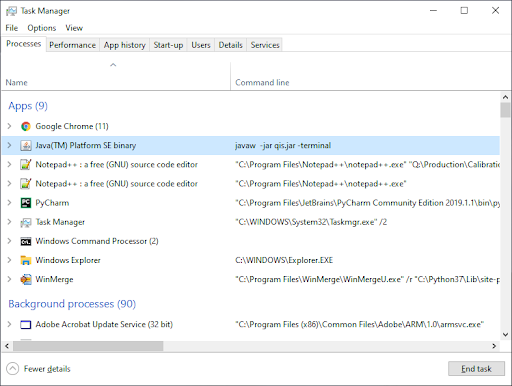 If you launch QIS in headless mode it will not appear in the system tray. Use the “-shutdown” argument in quarchpy to locate QIS on the default port and shut it down if found. “python -m quarchpy.run qis -shutdown” 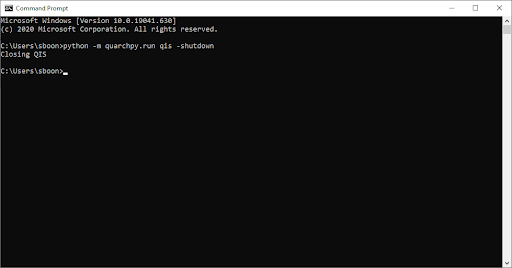 QIS in the task manager needs to be renamed so that it is clear that the process is QIS and not another java application. Then a FAQ can be written to show the user how to end the QIS process through the task manager.